Democrats should invest significantly in holding onto the 17th Congressional District seat in the November general election to maintain their current majority in the U.S House of Representatives, according to a political science expert.

Monmouth political science professor Robin Johnson said neither party can afford to write off districts like the 17th, which includes parts of Bloomington-Normal and Greater Peoria.

“It will be very competitive, and I anticipate the parties are going to try to kick money in and resources to try to win this seat,” Johnson said.

The newly drawn 17th seat includes parts of Peoria, Bloomington-Normal, Macomb, the Quad Cities, Rockford, and most of the northwest corner of the state.

Johnson said with King being from the Quad Cities, and Sorensen having roots in the Quad Cities and Rockford, the Peoria area could have a big pull in the November general election.

“As you know there’s just not a lot of competitive districts anymore. This is one of them,” Johnson said. “I think the Peoria area could be the key area.”

Johnson said Sorensen's name recognition from being a TV meteorologist, and King's fundraising in addition to her losing by just four percentage points to Democrat Cheri Bustos in 2020 were key factors that led the candidates to victory.

Democrats hold a 10-seat advantage in the U.S. House. Some polling has suggested Republicans are poised to win back control of the House.

Johnson said the primary election may have been a good day for many pro-Trump Republican candidates in Illinois, including Darren Bailey for governor and Mary Miller for the 15th Congressional District against fellow incumbent Republican Rodney Davis.

Johnson added it remains to be seen how many of them have a realistic chance in the general election. He said Illinois is a solid Democratic state, but the mood of the public will be critical in determining whether candidates who were part of a Republican anti-establishment “insurgency” can win in November.

“There’s a lot of anger. There’s a lot of feeling that things are headed in the wrong direction,” Johnson said. “Gas prices are high. Tell me what gas prices will be and the cost of a pound of hamburger in November and that could directly weight on this.”

Johnson said it's not likely Donald Trump's endorsement of Bailey or Miller made the difference in either race, since both won easily. 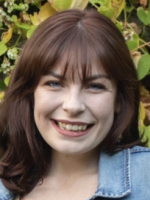 Jody Holtz | WCBU
Jody Holtz is a Morning Edition newscaster and announcer at WCBU. She joined the station in 2021 as a student intern while attending Bradley University.
See stories by Jody Holtz | WCBU

Eric Stock
Eric Stock is the News Director at WGLT. You can contact Eric at ejstoc1@ilstu.edu.
See stories by Eric Stock
Election 2022 ›