Matt Garrison says bandmates in Bloomington-Normal cajoled him out of a seven-year music hiatus that began with the birth of his son nine years ago.

Garrison is a long-time English professor at John A. Logan Community College in Carterville, Illinois. His return to music culminated with the debut album by a group he dubbed “Matt Garrison and the Robber Barons.”

The eight-song country/roots rock album is a testament to the disaffected, forgotten and left behind.

Garrison chronicles workers chewed up and spit out during completion of the Transcontinental Railroad in the 1860s. He finds the “one-time-wife-of-a-rich-man” drunk in a ditch on the side of the road. A drifter on a raft floats down the Mississippi looking for a new life.

“As a lifelong member of rural communities, those are the stories that appeal to me,” said Garrison.

Garrison grew up in Olney, a town of roughly 9,000 in southeastern Illinois. It’s a place he characterized as a once “very vibrant Midwestern small town with a farm family community structure.”  But he began to see his town decay even as a young man, despite the best efforts of the town.

“At the same time I became a construction guy for about a decade of my life between undergrad and grad school,” said Garrison. “When I came back to grad school, I knew I wanted to teach at a community college just because I felt like I had earned my working-class bones and those were my people. And those were the students and population I wanted to be close to. I guess those were also the stories I want to tell.”

The album’s title comes from a line in the song “I Belong Here.”

Because someone’s gotta live in this town

Besides I belong here.

Because I belong there/And I belong here.

It was written in 2002 after a move to Carbondale from Fort Collins, Colorado, a town he called “a bright shiny penny.”

“You know Carbondale is sort of a tarnished penny,” said Garrison. “Don’t get me wrong: Carbondale’s got some amazing soul and I love it deeply. But when I first arrived here it seemed like a slightly run-down, more forgotten place than we had been living previously. That’s where that lyric came from,” said Garrison, who added the song isn’t specifically directed at Carbondale.

“To me it’s something I hope people feel about a lot of the small towns where they live,” said Garrison. 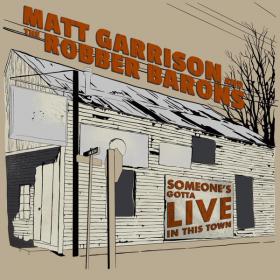 Though “Someone’s Gotta Live In This Town” is his recording debut, Garrison has been playing music for nearly three decades. He first picked up a bass guitar at 18 because he wanted to join friends already diving into the local music scene.

“I wanted to be part of the fun, so we started punk bands in Olney, Illinois, in the mid to late 80s when nobody had ever heard of such a thing around there. But we had a real thriving local scene in Olney through the early to mid-90s. It was really something to be part of,” said Garrison.

And he stayed with music until the hiatus nine years ago. That’s when he said his guitar skills deteriorated to the point where he could play but one song on guitar.

“That’s how out of shape I was and how out of touch I was with music,” said Garrison.

It was two years ago friends now in the Robber Barons poked and prodded him back to his guitar. That this album even exists is a testament to the tenacity of those Bloomington-Normal musicians he has worked with the past few years.

Two years ago this month Garrison had four or five songs he could play when those old friends gathered again to play.

“And Moody said, ‘Let’s do something with this,’” Garrison lightly laughed. “And it just took off from there. So I went to being kind of totally out of touch with music to have it race back into my life and take a center focus for me.”

The song “No Place to Hide” continues his pragmatic look at small towns. This time from a younger perspective:

“At times for me as a young person, my own small town became a prison,” said Garrison. “I desperately wanted out, and did get out. In my 20s when I worked construction I moved all around the country. I lived in North Carolina, Wyoming, and Colorado before eventually being drawn back into the Midwest because it’s my sense of where home is. I don’t mean it in any way as a criticism of how people live in small towns. Instead it’s more of a reflection of the kind of conflict I felt about it at times.”

Surprise, both musically and lyrically, is just one of the delightful aspects of this impressive debut from the 46-year-old Garrison. Just when you think you have a song figured out, a different instrument, chord change or vocal cadence emerges. The English professor says those flourishes were unconscious.

“Except that as a writer and a reader, I really value surprise,” said Garrison. “When we’re reading fiction … the thing that really hooks us and sparks for us is when a writer surprises us. Whether that’s with perspective on something or the way something is worded. As far as the music itself, a lot of that is just synergy. It’s not just me, it’s the Robber Barons and some of the special moments they brought to the recording.”

Garrison breaks from observing others to reconstructing four flickers of childhood memories on the song “Not All There.”

“The first verse was a memory of the first time I set eyes on the Mississippi River,” said Garrison.

I remember a house built on stilts down by the river/

There was a girl there, she had hair the color of a cottonmouth/

Her eyes were set so far apart/

You couldn’t be sure she wasn’t looking away/

“The next stanza was a real story from when I was 5 years old,” said Garrison.

I remember three generations of womenfolk telling me

Go out in the snow but stay away from the cove

And when I broke through the surface

The fish moved away so damn slow.

“I walked out the front door of my grandparents' house and they told me, ‘Don’t go around the back of the house and down by the pond because that dock is slick with ice and you’ll slip and fall through the ice.’ So I went out the front door and around the back and slipped off and fell through the ice. I was rescued by my Mom. She pulled me out by my hair. Nobody knows how long I was underwater. Every verse in that song is about random memory, but the choruses are about how difficult it is when we get older to really be sure that all of our memories are exactly what they think they are,” laughed Garrison.

I’ve forgotten so many things

“Someone’s Gotta Live In This Town” by Matt Garrison and the Robber Barons is an impressive music recording debut for the old punk rocker and novelist who says he has a number of unpublished manuscripts lying around. It’s not fair to already ask about a follow-up so soon, but Garrison offered one up anyway.

“The first novel I ever wrote is called ‘The Last Farmer,’ so what I’m doing musically now is I’m kind of taking that novel and I’m turning it into an album. It’s going to take some time to get that album done, but that’s going to be my next recording project,” said Garrison.

Listen
Listening...
/
Listen to GLT's review of "Someone's Gotta Live In This Town" by Matt Garrison and the Robber Baron.

People like you value experienced, knowledgeable and award-winning journalism that covers meaningful stories in Bloomington-Normal. To support more stories and interviews like this one, please consider making a contribution.