Updated at 4:30 p.m. with comment from Louis Gerteis  — The Confederate Memorial will be removed from St. Louis' Forest Park this week, likely by Wednesday.

The Missouri Civil War Museum and the city of St. Louis settled a lawsuit last week over who owns the memorial, though the action wasn’t announced until Monday morning. The museum will cover the cost of removing and storing the statue, as well as finding an appropriate place to display it — but it can’t be in St. Louis or St. Louis County.

“It’s a fantastic day,” said Mark Trout, the museum’s executive director, who was at the site in Forest Park on Monday monitoring the work, “This is what we wanted. We knew we could come to some sort of resolution with the city. It just took a little time. We’re thankful the city came around.”

St. Louis is the latest city to remove Confederate monuments — the most prominent being New Orleans. A number of other cities, including Baltimore and San Antonio, are still debating what to do with theirs.

The United Daughters of the Confederacy raised the money to erect the St. Louis statue in 1914. At the time, a strong white supremacist movement was taking root across the U.S., according to Louis Gerteis, the Founders Professor of History of the University of Missouri-St. Louis.

White supremacists began promoting the view that “slavery had not been the cause for Southern secession, that the South had been defeated by superior numbers but its honor remained intact, and so that monument was meant to commemorate that movement,” he said.

This month, the Daughters gave the statue to the museum, which then sued the city. A judge ruled there were enough questions about who owned the monument, and halted work until after a trial on July 6. The settlement avoids that trial.

Both sides agreed Forest Park was not the appropriate place to display the monument. Trout was concerned the city wasn’t doing enough to make sure that the monument wasn’t damaged beyond repair.

Trout said the museum did not yet know how much the removal, storage and restoration would cost. Krewson, who had pledged to find private dollars to fund the work, said she had been in contact with donors to let them know their contributions might not be needed.

Treasurer Tishaura Jones, who had raised about $18,000 through a crowdfunding campaign, said in a statement that she was pleased. She did not, however, say where that money would go.

“I believe that this monument has no place in Forest Park and should have been removed and displayed in its proper context in a museum years ago,” she said. 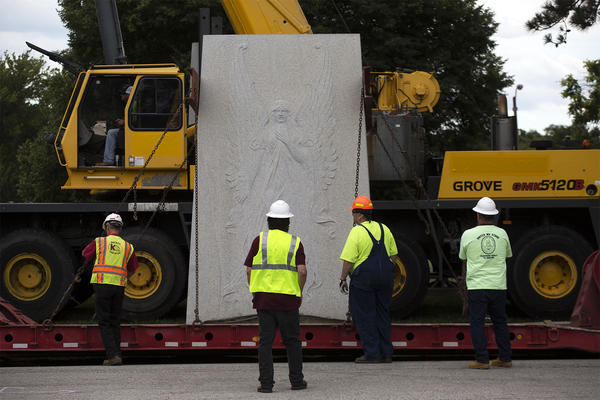 Reactions to the dismantling

Bill Hannegan lives across the street from the monument, and watched as the crane removed the 37-ton piece known as “Angel.” Though he had lobbied for the statue to stay in Forest Park, he realized it was no longer possible.

“It couldn’t stay here because of the vandalism,” he said. “I don’t think that was going to go away. At the last protest, the kids brought a sledgehammer, and had announced before that they were interested in hurting [the monument] with it.”

Linda Barro, who lives near The Hill neighborhood, said she hadn’t yet formed an opinion about whether the monument should have been left in the park.

“I’m glad I’m here to see it so I can remember it for the future,” she said. “From what I’ve read, it looks like it’s not going to be seen for some time, and when it does reappear, it may not be easy to see.”

Peggy Hubbard, a Belleville resident who took credit for letting the United Daughters of the Confederacy know what was going on, said the deal “saved history” by ensuring that the monument would again be displayed in the future.

“Why [the mayor] was hell-bent on removing it, I have no idea,” Hubbard said. “This is a slippery slope. If we start removing things we don’t like about our history, what is going to be untouched? That was my point to the city.”