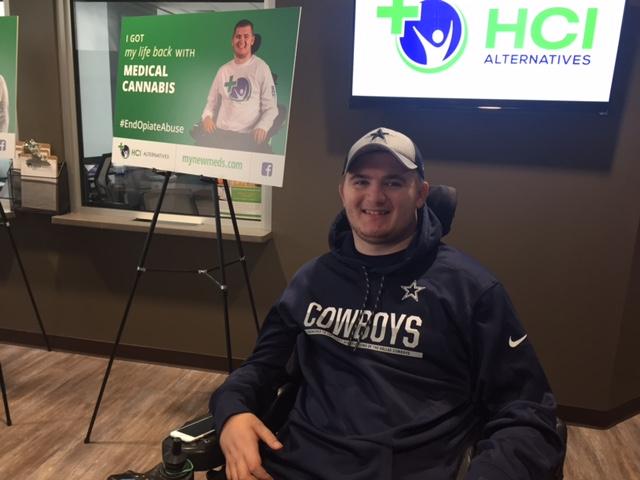 A cannabis dispensary is using a new tactic nearly a year into Illinois' slow-rollout of a medical marijuana program. The advertising campaign is designed to encourage doctors and patients to view cannabis as an alternative to opioids.

Listen
Listening...
/
Twenty-three-year-old Jon Gilson explains how and why he uses medical marijuana

More than 10,000 Illinois residents are certified to use marijuana for medical purposes; Kyla Travis, a Springfield resident who has multiple sclerosis, is one of them.

The drugs they had all sorts of side effects. Now that she uses medical marijuana, she says “the Vicodin, and the oxycodone and the morphine, I won't take that anymore."

HCI Alternatives, a licensed dispensary with locations in Springfield and Collinsville, is featuring Travis's story as part of its new campaign; billboards with their testimonials are going up around the state.

The company's CEO, Chris Stone, says the goal is to stimulate conversations between patients and doctors about alternatives to opioids. "To be able to say: "You know what? You're prescribing this, but is there any alternative to being able to not have to take these type of pain medications? Can cannabis be an alternative? Can ice compression be an alternate? There are other alternatives out there so you're not getting the pain medications that led to potential addictions," he says."

The campaign comes as addiction to opioids is seen as a national epidemic. 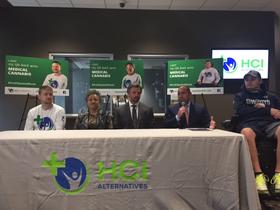 However, the federal government continues to lists marijuana in its most dangerous, Schedule 1, drug class, meaning it's more restricted than drugs like oxycodone. The U.S. Drug Enforcement Administration this summer rejected a bid to loosen restrictions on marijuana, so it could be classified as having a medical use.

Another HCI customer with a prominent role in the campaign is 23-year-old Jon Gilson, of Springfield.

Back in high school, Gilson was a local football star.

The SJR reporter wrote that with just 41 seconds left "linebacker Jon Gilson swatted down a would-be completion from a wide-open receiver. A piece of history ended when the ball hit the turf. And a piece of history was made."

On Monday, fresh off the Dallas's win the previous night, he was in a wheelchair, wearing a Cowboys cap and sweatshirt.

Five year ago, Gilson was in a bad car accident that he says left him with traumatic brain and spinal cord injuries.

Gilson advises medical marijuana skeptic to "talk to the people who are allowed to use it, get their story. Find out why it's so important" to them, he says.