Illinois Ranks #4 For Tornado Reports In 2015

According to the NOAA Storm Prediction Center, Illinois ranks fourth in the nation in the number of tornado reports in 2015.

Is this surprising news? 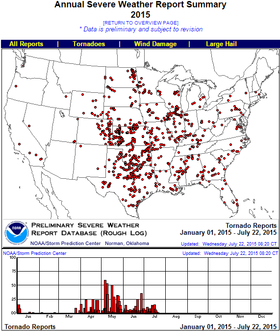 State climatologist Jim Angel says Illinois is usually in the top ten, but this ranking is a bit high compared to previous years at this time.

Northern Illinois experienced and EF-4 in April. That’s out of 64 reports.

Angel says that severity is rare. He says what is also unusual this year is that there have been more reports from the northern and southern parts of the state. He says central Illinois is typically more prone to twisters.

Here are the top five states:

According to NOAA, the most outstanding event for 2015 was the April 9 outbreak that produced 11 tornadoes, and caused two deaths in Fairdale.