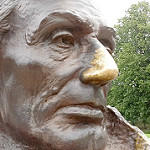 As Illinois Gov. Bruce Rauner built toward the crescendo of his State of the State address on Wednesday, he implored lawmakers to cut taxes and spending to ensure a more “prosperous future.”

To drive home his point, he ripped out a page from Speechwriting 101 for Illinois politicians.

“Abraham Lincoln once said: ‘The best way to predict the future is to create it,’” said the Republican governor.

But there’s a problem.

Lincoln never said that, according to three top Lincoln scholars.

And with that gaffe, Rauner became an unwitting circulator of fake history, committing a cardinal oratorical sin for the chief executive of a state called the “Land of Lincoln.”

“I cannot speak to what the origins of it are except to say what its origins aren’t. Its origins are not Lincoln,” said Harold Holzer, a prolific author, one of the nation’s top Lincoln historians, and a former chairman of the Lincoln Bicentennial Foundation.

So, too, said Rodney Davis, co-director of the Lincoln Studies Center at Knox College in Galesburg.

“I don’t recognize the quote,” he wrote in an email. “Sorry.”

The governor’s staff said the quotation is attributed to Lincoln on more than a dozen websites, and its sentiment echoes some of the commonly held beliefs of the nation’s 16th president.

But in an email to WBEZ Thursday, they seem to acknowledge they goofed.

“Thanks for pointing it out. The quote selected is widely attributed to President Abraham Lincoln but next time, we will certainly check with Lincoln scholars!” wrote Rauner spokeswoman Rachel Bold.

Where did the quote come from?

A spokesman for the Abraham Lincoln Presidential Library and Museum, which operates under the governor’s control, conceded there is no concrete evidence Lincoln ever uttered those words.

“The quote about creating the future has been attributed to Lincoln for decades, and while there is no hard proof he ever said it, the sentiment certainly matches other things President Lincoln is documented to have said,” said library and museum spokesman Chris Wills. “Examples include, ‘If we never try, we shall never succeed’ or ‘You cannot fail, if you resolutely determine that you will not.’”

What’s clear after Rauner’s speech: He didn’t say any of those confirmed Lincoln quotes.

Instead, the one the governor wound up reading is commonly attributed to a Nobel Prize-winning physicist named Dennis Gabor, said Daniel Weinberg, owner of the Abraham Lincoln Book Shop in Chicago’s River West neighborhood, and an expert on Lincolniana who said he has authenticated thousands of Lincoln signatures in his 46-year career.

Weinberg said he’s a little confounded that the governor or his staff didn’t first check on the quote’s accuracy with the Lincoln library and museum, or with another state adjunct called the Papers of Abraham Lincoln, which documents all things written by the late president.

“It would have not taken long to have found out that is not something that can be attributed to [Lincoln],” Weinberg said. “Yes, it should be embarrassing to an Illinois governor to do that, but today it seems that people don’t check their history very well, and it comes back to bite them.”

To his credit, Rauner invoked Lincoln in his 2017 budget address, starting the speech with historically accurate quotes from an 1862 message Lincoln sent to Congress.

But on Wednesday, the governor joined the likes of Ronald Reagan in misattributing Lincoln.

During a speech Reagan delivered at the 1992 Republican National Convention, the nation’s 40th president credited Lincoln with these pearls: "You cannot strengthen the weak by weakening the strong. You cannot help the wage-earner by pulling down the wage-payer. You cannot help the poor by destroying the rich. You cannot help men permanently by doing for them what they could and should do for themselves."

A Reagan spokeswoman later acknowledged his goof, telling the New York Times that the words the 40th president mistakenly attributed to Lincoln instead came from a book called “The Toastmaster’s Treasure Chest” by Herbert V. Prochnow.

“I think the governor is in a pretty good company in that this kind of thing has been going on for a long time,” Holzer said.

“There are really ways to take instruction and inspiration from Lincoln besides going into the ‘Toastmaster’s Handbook,’ which may be the same book Governor Rauner used. Who knows?” said Holzer.

His advice to the governor and his staff is the same one might give any aspiring young writer in a high school language arts class: Don’t believe everything you read on the Internet.

“You can’t just Google something and assume that the result is going to be 100 percent factual. No one should do that for any reason: a student, a governor’s office, a radio station or me, writing about Lincoln. So that’s the lesson,” Holzer said. “Just because the information is easily available doesn’t mean it’s true.”