Many communities in Illinois have rules that say renters can lose their housing if someone in the home is connected to a crime. City leaders who back the policies say the rules make neighborhoods safer. But fair housing advocates question the tactics.

The local ordinances are known as crime-free housing programs. That means that as a condition of their lease, renters agree not to commit any major crimes — felonies like murder, assault or armed robbery. And they promise their guests won’t commit any crimes on or near their rental property. If either happens, the landlord can evict them.

Residents are also at risk of eviction if they commit multiple lesser crimes, including theft, or rack up four or more violations of city code — offenses including leaving garbage in their yard and noise complaints — within a certain period.

More than 100 communities in Illinois have either crime-free or nuisance property ordinances on the books, according to a study from the Sargent Shriver National Center on Poverty Law, a Chicago-based advocacy group. Nuisance ordinances generally require landlords to evict tenants who frequently call the police or violate city codes.

Opponents of these laws argue the measures unfairly target low-income renters and people of color. They also worry the rules will discourage victims of domestic abuse or those struggling with mental illness from calling for help. And they say there’s often no way for tenants to appeal evictions based on violations of crime-free ordinances.

Elected officials in Rantoul, a village near Champaign, recently adopted a crime-free housing program. By next January, all Rantoul renters — that’s nearly 50 percent of village households — will have to sign the “crime-free” addendum as part of their lease agreement.

After the air force base closure, Brown said the village’s crime rate climbed, though in the last several years it’s declined. An analysis conducted by the village police department showed the majority of major crimes committed in Rantoul occurred on rental properties, according to Brown.

He said that’s a big part of the justification for the program, which specifically targets renters and landlords.

“We want to put the responsibility on the tenant – to be responsible for themselves and their household member and guests they invite on their property,” Brown said.

In addition to the lease addendum signed by the tenants, all village landlords must attend a training session held by the police department. The training covers crime-prevention techniques and how to screen and evict tenants.

“We believe that if you properly educate landlords, and you give the landlords and property owners tools that they need and information they need, then then that's probably half the battle right there of reducing crime,” he said.

Windy Fultz has lived in Rantoul for nearly a decade at the Mitchell Court apartment complex, a series of one-story buildings, with one to four bedroom apartments and relatively low rents.

“I think it goes too far,” he said. “I think it impinges on your rights to be responsible for those who come to see you.” 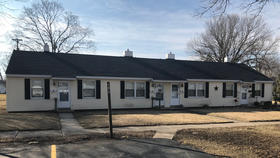 He’s worried about what happens when a tenant’s friend gets arrested for a crime while visiting— that’s a violation of the crime-free lease addendum. That means the tenant is subject to eviction even if they didn’t commit the offense.

“Well they’ve been visiting you, guess what? I’ve got to evict you and you had nothing to do with it,” James said.

“It was either sign that or be told I have to move out, and that I can’t do,” she said. “Are they going to pass this everywhere, to where people can’t even rent?”

Brown said the police expect landlords to explain the addendum, and the information is covered in the training.

“Caught in the dragnet”

Kalila Jackson represents tenants who’ve lost their housing as a result of crime-free rules in other cities in Illinois and Missouri. She’s an attorney with the Metropolitan St. Louis Equal Housing and Opportunity Council.

Under crime-free ordinances, Jackson said landlords receive a letter from their police department notifying them that an arrest occurred at their property, or that their tenant has received too many citations for municipal code violations. The landlords then notify the tenant that they have to move out.

Homelessness, she said, is sometimes the result.

“They don't have the financial wherewithal to gather up the resources to pay a security deposit, to pay the first month’s rent,” she said. “And so, functionally, that's why we see so many people forced into homelessness.”

Landlords have few options when they receive the violation letter from the city. They can spend time and money on a long eviction court process; they can ignore the letter and face fines from the city; or they can just tell tenants to leave.

“It's a reasonable response,” she said. “I think it's up to the jurisdictions not to put landlords in a position where this can happen.”

Brown, the Rantoul police chief, defends the crime-free rule. He said the department wants landlords to use the court process, and that’s why they talk about it in the mandatory, crime-free housing seminars each landlord is required to attend.

“We recognize and we’re concerned someone may get caught in this that really isn’t deserving,” he said. Rantoul did include a way for landlords to appeal on behalf of tenants, but that’s only if landlords are willing.

Another potential unintended consequence, Jackson said, may be that tenants are discouraged from reporting crimes for fear of losing their housing.

That’s particularly dangerous for victims of domestic abuse or people with mental illness.

A study of nuisance ordinances in the St. Louis area included documented cases of two dozen women who said the rules discouraged them from calling 911 when they were being abused, making them more vulnerable to violence.

A 2015 state law mandates municipalities with crime-free housing or nuisance ordinances carve out exceptions for reports of and charges related to domestic abuse.

But Jackson said it isn’t enough.

“There are still ways that people can be caught up in the dragnet,” she said.

Collinsville, a city of about 24,000 people east of St. Louis, passed a crime-free housing ordinance in 2011, and tweaked the rules last fall. The Collinsville law requires a similar lease addendum to the new requirement in Rantoul.

Collinsville Police Chief Steve Evans said they’ve seen a drastic reduction in the calls to the police, and fewer “hot spots” of crime around rental units as a result of the program.

“The decrease… is absolutely a result of better quality of renters,” he said.

Like Brown, he sees the central purpose of the program as an educational one.

“Most of what crime-free coordinators are doing is educating landlords and communicating with landlords so that they can stay on top of less serious things, so there aren’t problems that may be occurring or developing on their property” Evans said.

Housing advocates, like Jackson, continue to fight to repeal or change crime-free housing and nuisance property ordinances in Illinois. The Shriver Poverty Law Center sends letters urging officials considering these measures not to pass them out of a concern for the lack of due process these rules afford tenants.

Towns, like Rantoul, however, aren’t swayed by these arguments; they continue to pass and enforce crime-free housing ordinances in the hope that these rules will make their communities safer.

This story was updated 3/15/19 to correct the title of the Sargent Shriver National Center on Poverty Law.