What Will Rauner Say In His State Of The State Address? 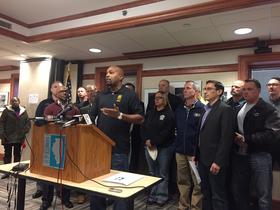 Illinois residents will hear from their Governor Wednesday when Bruce Rauner gives his annual state of the state address. It comes at a difficult time in Illinois government: For nearly eight months there has been no budget.

Social service agencies that depend on state funding are closing programs, the backlog of unpaid bills is piling up, and some public universities are moving forward with layoffs.

But Rauner also says Illinois has had important achievements in the year since he took office. He says he'll talk about those during his speech.

"We'll also talk about our challenges, and our failings so far. And lay out a game plan for what we'd like to do in the coming 12 months," he said earlier this week.

Sen President John Cullerton says he's "eager to hear what the governor's plans are on Wednesday, but it's (the state's) in bad shape, and we want to change it."

Cullerton, a Democrat who is working with Rauner on a plan to ease the state's pension debt, sums up the status of the state right now this way: "Social service programs are suffering. High school counselors are telling the seniors not to go to school in Illinois because we haven't funded our schools. We have a growing deficit. We have been downgraded. And that is not a business friendly environment in my opinion."

It's been a year since Rauner gave his first state of the state speech. He ended it with a call to action.

"Let's come together, governor and legislators, to make the tough decisions that everyone from Chicago to Cairo, Rockford to Carbondale, knows we must make. This is our last, best chance to get our house in order," Rauner said at the time.

But on Tuesday, Rauner critics were publicly lashing out at him, ahead of the statewide address. A group of labor leaders and workers gathered to say the state's suffering at Rauner's hands. They say he's so bent on union-busting, he's forced a budget crisis.

"He wants us to think that the policies that's going forth will benefit the workers, but it's not," said Terrence Neal member of the Painters' Local 147 union, out of Chicago. "Instead it's just one of those power grabs, you know, some political who-ha."

Advocates from social and service organizations likewise held press conferences, to highlight the consequences of the lack of budget, and to call for a hike in taxes to reverse cuts to their programs.

Rauner recently called the lack of budget an "outrage," saying "it's inexcusable for us to not have a budget by now." Rauner continues to put the onus on Democrats, and says he's committed to his plans for fundamental change.

Business leaders have sided with Rauner in his campaign for making workers' compensation less expensive for companies and weakening collective bargaining and prevailing wage requirements.

Gov. Bruce Rauner will give his second annual State of the State address at noon Wednesday. After a year of stalemate, he's expected to make some effort to bridge a bipartisan divide.