A new report is trying to calculate a more realistic tally of what crime costs in Illinois.

The report looks at recidivism — that is, people who get out of prison and are convicted of a new crime. That happens to nearly half of Illinois' inmates within three years of getting out. 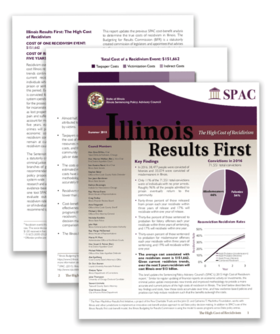 In "The High Cost of Recidivism," the Illinois Sentencing Policy Advisory Council estimates the problem will cost more than $13 billion over the next five years.

Council executive director Kathryn Saltmarsh says that figure goes beyond traditional measures, like how much Illinois spends on prisons and police.

Saltmarsh says about half the cost of crime is borne by victims. That includes not just tangible things like stolen property, medical bills, and lost wages; but also intangible costs like pain and suffering.

Saltmarsh says even a modest reduction in the recidivism rate could save billions of dollars over the next decade.