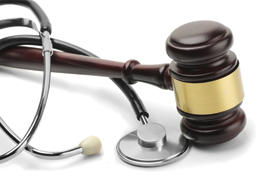 A Downers Grove doctor and a pregnancy center in Rockford are suing to overturn Illinois' newly updated right-of-conscience law.

Right of conscience laws come into play at the crossroads of medical providers' obligations and their personal beliefs.

No doctor is required to perform an abortion, but a doctor -- even one with moral or faith-based opposition to the practice -- is required to refer a patient to a doctor who will.

To the obstetrician and pregnancy centers represented by attorney Kevin Theriot, of the Alliance for Defending Freedom -- a nonprofit legal alliance that advocates for people to freely live their faith and is taking this case pro bono -- that's akin to participation.

"The danger here is that people are starting to say, 'well you can have freedom of religion, you can abide by your conscience ... as long as it doesn't make me uncomfortable or might make something a little inconvenient for me,'" he said.

He says no doctor should be forced to be an accomplice to something that violates his conscience.

"We have doctors who not only don't want to participate in abortion, but don't want to refer people for that procedure," Theriot said.

Theriot has filed a lawsuit seeking to get the law tossed.

The law stems from a situation in which a pregnant woman says her health was endangered when her doctor's religious beliefs interfered with his treatment of her.

Advocates say the law ensures patients will receive all medically necessary information; the actual language does not specify abortion. The updated Act says that it is the state's policy "to respect and protect the right of conscience" of anyone who delivers medical care, but also "to ensure that patients receive timely access to information and medically appropriate care." It says that health care facilities must have protocols to ensure that conscience-based objections "do not cause impairments of patients' health" and says that if a patient requests care that a physician can't provide, the doctor or someone else at the hospital or health care facility must transfer the patient. A court date is set for November 3.

Gov. Bruce Rauner -- a Republican who campaigned saying he had no social agenda -- is facing criticism from conservatives for signing the measure, Senate Bill 1564, into law.