New device can inject drugs into the brain — via remote control

Scientists at Washington University and the University of Illinois at Urbana-Champaign have developed a new tool to study how specific brain cells affect behavior.

The miniature, wireless device can inject drugs into the brains of live mice.

Washington University neuroscientist Michael Bruchas, who co-led the research, said the new device is a big improvement over previous methods, which required the mice to be tethered to the drug-delivery source. “We’re just using essentially the same technology that’s in a TV remote to drive the release of the drug into the animal,” Bruchas said.

The drugs are injected into the mouse’s brain through a soft, flexible filament about the diameter of a human hair. The rest of the device is mounted on the mouse’s head, so it’s small — about the size of a Lego block — and weighs less than 2 grams.

University of Illinois materials scientist John Rogers, who worked with Bruchas to develop the device, said that miniaturization is critical. "You don't want this gigantic clunky thing sitting on the animal,” Rogers said. “Because the main point here is to study natural behaviors — so you can study the basic functioning of the brain. You don't want your hardware system to be influencing those natural behaviors."

Bruchas studies how chemicals and neural systems in the brain control stress. “We study things like pain, addiction and depression, all of which are influenced by stress,” Bruchas said. So it was critical that the device itself not stress the animals out. “They behaved normally, they moved around normally,” Bruchas said.

Bruchas used the device to inject chemicals into the mice’s brains to test for effects on their motor skills and reactions to rewards. The technology worked, and the animals responded as expected. “And so with a device like this, we can take control of various brain pathways, and then try to better understand how those pathways in the brain are mediating different behaviors,” Bruchas said.

This video shows how the tiny, wireless device injects fluid and delivers light into the brain of a mouse. Credit: John Rogers, University of Illinois at Urbana-Champaign and Michael Bruchas, Washington University School of Medicine.

The new technology builds on a previous, remote-control device designed by the same research team. It used miniature LEDs to stimulate the mice’s brain cells, some of which have been genetically-engineered to respond to light.

“It’s a technique called optogenetics that has become very popular in neuroscience,” said Jordan McCall, a former student in the Bruchas lab. “Previously, if you wanted to stimulate the brain, you could stick an electrode in. But that was a very non-selective, non-specific approach. Using this technique — in a very complex, messy system like the brain — we can very selectively isolate unique neurons to manipulate.” 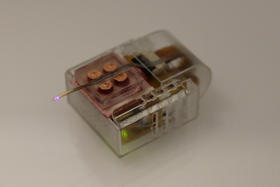 Rogers said using electricity to stimulate the brain is still an important technique in neuroscience and medicine. And he believes it would be even more useful if it were miniaturized and could be triggered remotely.  “I think it would be very natural as a next step for us to add the electronic interface,” Rogers said. “So we have the whole suite of options: drugs, light and electrical intervention.”

Rogers would also like the device to be able to extract fluids instead of just injecting them. Bruchas wants it to be refillable, with something like an ink cartridge, except for drugs. And they’d both like to make it even smaller.

For now, Rogers and Bruchas view the wireless device as a powerful tool to study brain function. But in the future, similar technologies could be used to treat human brain disorders like Parkinson's disease, or to deliver chemotherapy drugs to tumors.

Their current research is published in the journal Cell.