Michael Madigan: A DNC Interview With The Chairman Of The Democratic Party Of Illinois 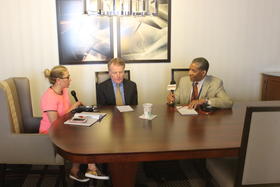 As Chairman of the Democratic Party of Illinois, House Speaker Michael Madigan ran the show for Illinois’ delegation last week at the Democratic National Convention.

Listen
Listening...
/
An extended (though this isn't *all* of it, yet!) interview with Speaker Madigan at the DNC

Madigan took some time before the convention wrapped up to sit down in Philadelphia with Illinois Public Radio Statehouse Bureau Chief Amanda Vinicky and WBBM radio's Craig Dellimore.

They touch on everything from term limits to Donald Trump, to the state budget and the November election.

Madigan began the joint interview talking about the effect Bernie Sanders – and his most vocal supporters --- has had on the Democratic Party.

On Gov. Bruce Rauner: "What we need is for the governor to become reasonable, to recognize that Illinois is not some extreme right state in the right part of America. It’s a moderate state. It’s in the middle of the country. It’s a mainstream state, and the people of the Illinois expect the public officials in the state not to be extreme, but to be reasonable."

On term limits: "In the last primary election, friends of Bruce Rauner spent over $1 million in an Illinois House district on the Southwest side of Chicago, attempting to remove me from office. The voters of that district recognized who the enemy was and voted to keep me in office. That’s how term limits should be administrated."

On the Monetary Award, of MAP, grant for low-income college students: "So if you’re a poor student today planning to attend college in IL starting in Sept, you don’t know the status of the MAP program, you don’t know whether there will be state support for your college tuition, or whether it won’t be there. That’s the product of the Rauner extremism in Illinois. It’s wrong. It ought not to happen, if Bruce Rauner wants to pick on some people, he ought to find some big people to pick on, not little people who are trying to put themselves through college."

On his relationship with Senate President John Cullerton: "What the governor should understand is that that’s an old divide and conquer theory which was practiced by the British against the Irish. And he’s working with two Irishmen – Madigan and Cullerton – who are very aware of the British history, and we’re not going to allow that to happen."

Clinton, The DNC, Illinois And The White House

In roughly 100 days, voters will decide whether she or Republican Donald Trump will be the next president. Which means it’s the beginning of the end for President Barack Obama.

Illinois was right up front throughout the convention.

Different Breeds Of Convention Democrats Ask: Whose Party Is This, Anyway?

Democrats have become accustomed to having the best speech at their quadrennial convention given by someone named Obama. This year, that person might also be named Michelle.

Hers was not the keynote, nor the most anticipated, nor the longest speech of the night. But it mesmerized and subdued the raucous and rebellious crowd, focusing the enormous energy of Philadelphia's Wells Fargo Center just where convention organizers had hoped — on Hillary Clinton.