Social service agencies that provide support to thousands of people in the Metro East will be operating without state funding starting Wednesday if Illinois lawmakers and Gov. Bruce Rauner can’t reach a budget compromise before the start of the new fiscal year.

Funding for most state programs, including child care subsidies and early intervention for children with developmental disabilities, have yet to be approved.

“Right now our board of directors and staff are trying to work out some alternative solutions for continuing to serve the … neediest people we work with in order to make sure they at least get basic services for the next two weeks even though we may have to lay off a large number of staff,” said Bill Kreeb, director of Lessie Bates Davis Neighborhood House in East. Louis.

Kreeb said he will have to lay off as many as 75 people right away if state funding isn’t approved for the programs Lessie Bates runs: day-care and after-school programs for the children of low-income working parents, and home support for older adults who would otherwise have to go into nursing homes. Lessie Bates employs about 220 people.

Even if funding is approved, however, Kreeb said he is worried that stricter eligibility requirements implemented by Rauner to stretch the budget will make things difficult for his clients. Starting July 1 parents signing up for child-care subsidies can earn no more than 50 percent of the federal poverty level, which is about $840 a month for a family of three.

“In order to get into (the child-care subsidy program right now) you can be like 150 percent of the poverty level, which only makes sense, because if you’re working full time at minimum wage under his proposal you wouldn’t even be eligible for child care. Which makes no sense at all. At 50 percent of the poverty level you wouldn’t even be working. So why would you need the program?” Kreeb said. 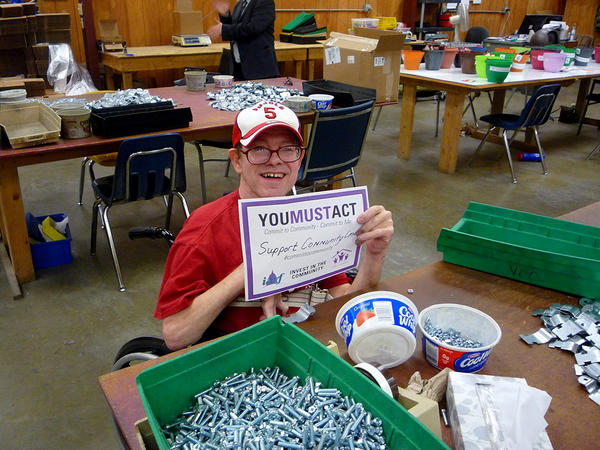 Another agency awaiting word on its future from Springfield is Community Link, a non-profit based in southern Illinois that provides therapy for children under 3 with developmental disabilities. The agency also runs three workshops and seven homes for adults with developmental disabilities such as Downs syndrome or other long-term conditions that impact physical or mental ability.

“Our fear is that one of two scenarios is going to happen: It’s going to be a prolonged budget impasse where we have to go without funding for quite a while or … that they do work it out but they enact cuts,” said John Huelskamp, executive director of Community Link.

Huelskamp said that his agency could hold on until November without state funding by digging into reserves and getting a loan if need be, but he’s also afraid a budget compromise will bring funding cuts his agency can’t absorb.

“All of a sudden if they tell us you have a 7 percent cut, well that’s still very Draconian for us as an organization and we could still be in the same place,” Huelskamp said. “It won’t be as drastic as the budget impasse but over time we’d have to lay off so many staff and start looking at service and people we support that that could be a very bad outcome too.”

Huelskamp said he originally thought schools starting in August would push politicians into action on the budget but now that Rauner has approved funding for K-12 education he’s afraid they will be less motivated to act quickly.

“The school systems are going to go on as normal. It’s everything else in the state — the not-for-profits, the people supporting people with disabilities, the children zero to 3 — those are the ones that are kind of being left out to dry right now. And I just hate that our society is picking --like this group’s OK but the rest of them are going to sweat this out,” Huelskamp said.

Jane Nesbit, executive director of Developmental Disability Services of Metro East, is a bit more optimistic than Kreeb and Huelskamp.

“I’m pretty much a half-glass full person so I’m hoping of course everything will work out and our agency will have the cash on hand or a relationship with a bank that would allow us to borrow money if need be until such time as a budget is passed and the comptroller’s office is able to pay us for services rendered,” Nesbit said, noting that since she just signed a new contract with the state, her agency will eventually get paid even if there is a delay.

Developmental Disability Services assesses the needs of people with disabilities and helps coordinate their care.

Illinois lawmakers don’t return to session until Tuesday – giving them just one day to avert a partial state shutdown.