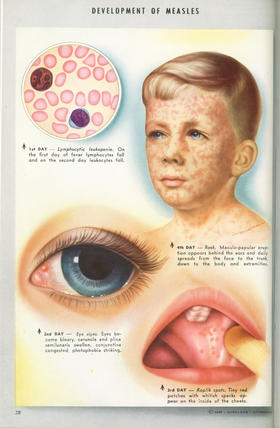 The recent surge in cases of measles across the United States has focused attention on the choices families make about immunizing their children. Like most parents, the young married couple I’m about to introduce you to has tried to do everything possible to ensure their baby is healthy.

"We made our own food," the dad says.

"Yes, from the beginning she hasn’t had sugar," the mom says. "Well, on her first birthday she had a couple of bites of cake, but to this day we make our own food.  We started with the Baby Bullet, making purees for her just out of fresh vegetables and fruits."

Do they use cloth diapers?

"That is one thing that we did not do," the mom says.

"We drew the line on the  cloth diapers," says the dad. "That was one step that we could not do.

They don’t want to reveal their names, because when it came to giving their daughter immunizations, they went a little off the beaten path. So here’s Jane Doe, talking about the decision she made with her husband, John Doe.

"Initially, he was thinking no and I was thinking yes," she says. "And that’s why we were like alright, well let’s just look at everything. And we talked to people who had and who hadn’t and the delayed vaccinations -- the Dr. Sears schedule -- is what we do. It was the best option for us."

Their child is now ca ught up with other kids her age when it comes to vaccinations. But with the recent measles outbreak, including six infants in suburban Chicago, the debate surrounding childhood immunizations is so heated, the Does are afraid they might lose their jobs, simply by admitting they used something other than the standard immunization schedule.

Medical professionals say this conversation is healthy, and long overdue.

“I think that, from a personal standpoint, the debate has changed," says Dr. Douglas Carlson, chief of pediatrics for Southern Illinois University School Medicine and medical director of St. John’s Children’s Hospital. He says doctors should stand their ground when parents refuse to vaccinate their children.

“I, as a pediatrician, don’t like it when you’re putting your own children at risk for things that I believe are the wrong reasons," Carlson says, "but in some ways, I say well, it is your child. You as a parent can have that. But it’s becoming clearer that you are putting other people’s children at risk unnecessarily.”

The people most at risk fall into two groups: One is babies under the age of 1, like the six in suburban Chicago, because they’re too young to be vaccinated. The other is people whose immune systems have been compromised, by cancer treatment, organ transplant or other illness.

“They’re not just more likely to catch it – they’re more likely to have serious complications," Carlson says. "Because it’s not only just catching it, it’s your inability to fight it off once you catch it.”

Dr. Carlson says about 20 percent of people who catch the measles require hospitalization due to complications.

“Pneumonia, ear infections, are common. About one in a thousand times, a patient will get a brain swelling because of measles," he says. "Sometimes that is temporary and goes back to full function, but sometimes it can have lifelong damage.”

Those potential complications haven’t influenced Tabitha Bernhardt, a Springfield paralegal and mother of two. She’s done her own research, beginning with reading the package inserts that accompany vaccines, and by exploring the data available through the Vaccine Injury Compensation Program, a fund administered by the federal government to settle claims made by people who suffered negative reactions to vaccines.

“If there wasn’t an issue," Bernhardt says, "they wouldn’t have had to create a compensation fund.”

Her 12-year-old son got most of his immunizations, but the skin problems he suffered after each round of shots prompted Bernhardt to delay vaccinations for her 4-year-old daughter – indefinitely.

“I feel much more secure about my ability to nurture her through a case of the measles than I would having to deal with any of the laundry list of side effects,” she says.

Measles is one of the most infectious diseases known. Dr. Carlson  even worries about visitors to the waiting area of the emergency room.

“You can catch the measles for up to several hours after someone has left that area, just simply by breathing the air in the room that someone with measles was in two hours ago,” he says.

Vaccines are available at local public health departments. Children on Medicaid or without health insurance do not have to pay.