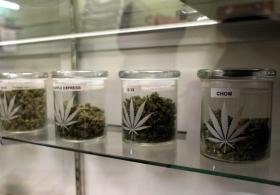 In the midst of the recreational cannabis debate, Illinois lawmakers are also looking to make the medical cannabis pilot program permanent, but it will include a few changes.

As it's written, the proposal would allow anyone to receive medical cannabis as long as they have any condition or symptom that a doctor says could be treated with the drug.

Listen
Listening...
/
Listen to the story.

But state Rep. Bob Morgan (D-Deerfield), who is sponsoring the proposal, said he’s gotten some pushback on the idea.

“There’s concerns in the House to make this a better bill, to take that language out, while also looking at whether or not we should expand the types of medical professionals who can certify,” he said.

It would be quite a drastic change compared to the current list of only about 40 debilitating conditions that allow a patient access to the Medical Cannabis Pilot Program.

Morgan said he’s working on getting list of conditions expanded regardless, to at least include a broader list of conditions that were approved by the Illinois Department of Public Health's Medical Cannabis Advisory Board. Conditions like chronic pain, autism, and irritable bowel syndrome would be included.

The pilot program does not expire until the summer of 2020. Morgan said with so much debate surrounding the possibility of a recreational cannabis program, he wants his proposal passed sooner rather than later to give patients confidence in the program.

“The medical cannabis program will continue and survive regardless of whether they adopt a recreational cannabis program in Illinois and secondly that we are adding these medical conditions that have kept tens of thousands of people from participating even though they’re suffering,” he said.

Currently only physicians can certify patients for cannabis use, but Morgan is also looking to include other medical professionals. Whom it would include, has not yet been decided.

The state of Missouri is moving toward medical marijuana, naming an outgoing lawmaker to a leadership role and announcing the start of the process for those who want to grow, make or sell marijuana products.

Governor Bruce Rauner signed a measure on Tuesday that will allow medical cannabis to be used as an alternative treatment for conditions often treated with opioids, such as cancer, HIV, Alzheimer’s and more.