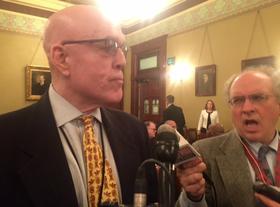 Lawmakers' latest bid to mitigate the damage of the budget impasse centers on helping social services.

Court orders have kept money flowing to certain social services, but many others have had to scale back or close after waiting more than ten months for the state to pay their bills. These autism, drug-treatment, and housing programs would get about $700 million under a measure advanced on a bipartisan basis by an Illinois House committee.

"We're listening to people who are saying if there's a way to help us, please give us some help," said the measure's sponsor, Rep. Greg Harris, a Chicago Democrat.

He says it would get human service agencies about half of what they're owed, for this year.

Lawmakers are supposed to pass a budget for next year, fiscal year 2017, by the end of this month.

Although Republicans gave initial approval to the stopgap human services bill, Gov. Bruce Rauner's office signaled concern that this plan is evidence Democrats are backing away from broader negotiations.

It follows a similar formula used to get funding to public universities and community colleges: Much of the money comes from a fund that's been sitting on a balance, rather than from the state's main checking account. Additionally, Democrats point out, it is not contingent on passage of the governor's pro-business, union-weakening agenda that's at the heart of the partisan standoff.

Gov. Rauner Optimistic A Budget Solution Can Be Reached in May

Illinois Governor Bruce Rauner says he wants a "grand compromise" on a budget for both this fiscal year and the next one.  And, he wants it by the end of next month.