Another Chance For Tornado-Ravaged Towns 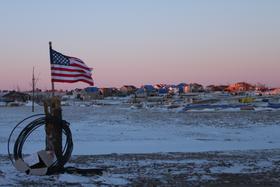 Illinois' Congressional delegation is trying to get the Federal Emergency Management Agency to revise how it distributes aid after natural disasters. As WUIS has previously reported, the lawmakers tried before to no avail.

When a tornado touched down in southern Illinois several years ago, devastating the small town of Harrisburg, FEMA turned down Illinois' request for disaster assistance.

Illinois Senators Dick Durbin and Mark Kirk, as well as several members of the U.S. House, say it's because FEMA uses a flawed formula --- one that unfairly disadvantages small communities in states like Illinois, that have large populations, because of big cities, like Chicago.

They've introduced a plan to revise the formula. It would have FEMA take the size of a local tax base and poverty rate into account.

They've tried this before; but the effort stalled.

If this latest try proves successful, it could be big for Harrisburg, Gifford and Washington --- the measure calls for FEMA to use the revised formula retroactively, to 2012.

The Federal Emergency Management Agency has denied a request for aid to local governments in Illinois after deadly tornadoes swept the state in November.

Southern Illinois tornado victims may find it easier to rebuild after this year's deadly tornado... as legislation in Springfield aimed at holding the line on property taxes advances.

A southern Illinois community hit by two natural disasters in one year is getting some long-awaited good news.