In his annual Black History Month essay for Reading Baseball, Pete Peterson highlights some of the top players from the Negro Leagues, some of whom made it to the big leagues and others who didn't get the chance.

Reading Baseball is a series of essays and commentaries by Richard "Pete" Peterson, the co-author, with his son, Stephen, of The Turnpike Rivalry: The Pittsburgh Steelers and the Cleveland Browns. 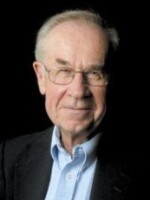 Pete Peterson
Richard "Pete" Peterson is the creative force behind WSIU Radio's Reading Baseball Series. Pete's original essays and commentaries are a regular staple for any fan of the game.
See stories by Pete Peterson
Latest Stories
Smart Speaker
Your smart speaker just got smarter. With a few simple commands, you can access the entire world of NPR – all the latest news, newest podcasts, and discussions of the day.
Learn More
Related Stories