SIU Reviews: Southside with You

New on DVD this week is the 2016 bio-graphic romantic drama  Southside with You.  In this edition of SIU Reviews, film critic Davey Peppers takes a closer look at the movie that chronicles the first date of future first couple Barack and Michelle Obama.

Southside with You is available Tuesday at a movie store near you. Davey Peppers is a freshman studying Cinema and Journalism at Southern Illinois University Carbondale. He has written reviews and film-based news stories for The Cumberland Presbyterian magazine and for WhatCulture.com. 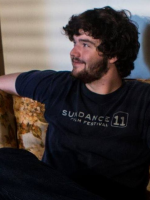 Davey Peppers
Davey Peppers is a freshman studying Cinema and Advertising at Southern Illinois University Carbondale. He does video reviews for the YouTube channel BelowTheLine as well as writing reviews and film-based news stories for the website OneOfUs.net
See stories by Davey Peppers