State Senator Dale Fowler (R-Harrisburg) says crews are refurbishing the campgrounds, building a new shower house and building more cabins. And, eventually, thanks to a $200,00 state grant, the Friends of Fort Massac will soon demolish the old Laidlaw building adjacent to the state park.

Once the former city eyesore is gone, the Friends Group will then raise funds to build an authentic late 18th century village. Mike Korte is the president of the Friends and he says plans are to build a church a school and a general store.

The $200,000 grant was provided by the Illinois Department of Commerce and Economic Opportunity. 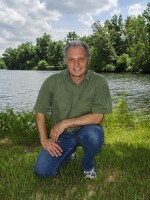 Kevin Boucher
Born in Newport, Rhode Island to a military family, Kevin Boucher traveled the country and the world at a young age before his family settled in Murphysboro, Illinois in 1976. He earned a Bachelor's degree in Radio-Television at Southern Illinois University (SIU) in Carbondale and worked in commercial radio before becoming the Traffic Manager at WSIU Public Television. Boucher has since earned a Master's degree in Professional Media & Media Management Studies from SIU's College of Mass Communication & Media Arts. He is an outdoor enthusiast who enjoys gardening and exploring the flora and fauna of the Shawnee National Forest and other beautiful natural areas across southern Illinois. Kevin is embarking on a new path with WSIU as the Community Engagement Producer for WSIU Radio. Look for Kevin's work on air and on line.
See stories by Kevin Boucher